James at the Bullfights!

On the 15th of May, I attended a bullfight with my host family. Originally the family had planned to bring me to the Feria de Nîmes. We arrived in Nîmes and I instantly noticed the first thing a proper Irish person would notice. The grass. I pointed to the grass and asked my host mother how it was so fluffy. She responded by saying something about the grass being watered every day (inside my head I was thinking ‘gracias’ but for some reason, I didn’t say it. Thinking back on it now, I really wish that I had said it. It would have been so cool) but I was already under the spell of Nîmes.

Nîmes is an absolutely beautiful city and I would recommend anyone going on an exchange to the south of France to visit Nîmes. After my experience with the grass, I walked around the city in a trance. The atmosphere at Nîmes was fantastic. I was told by my host mother that there were over one million people in the city for the Feria. We walked around admiring the fountains of Nîmes until we turned the corner. There were people everywhere. We stopped mid-way down the street to admire a band. The music was fantastic. All the people listening to the band were jumping up and down. The atmosphere was unbelievable. 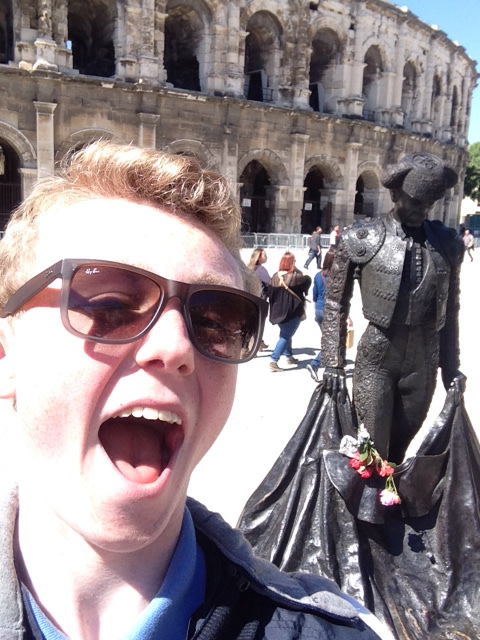 Next up we searched for the amphitheatre in Nîmes. After we found it, the girls decided that a shopping trip was in order. For two and a half hours. After this fantastic experience, the host mother asked me if I would be up for seeing a bullfight. I thought to myself what could possibly go wrong. The build-up to the bullfight was enjoyable as the atmosphere inside the amphitheatre was good. I just felt very sorry for the bulls. It was also the first experience of a bullfight for the rest of my whole family, except the mother who was a regular, and the girls despised it. However, I managed to survive and I live to tell the ‘tail’ (pun intended). 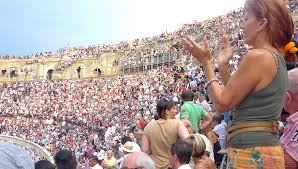 A tip that I would give everyone is: always accept the opportunity to go out for trips with the family. Even if you think that the trip will be boring, go. It will show the family that you appreciate the effort that they are putting in. I have been very lucky with how much effort my host family have put into making my weekends worthwhile and interesting. In other words, if the family offer you an opportunity ‘take it by the horns’. (I apologise for causing you to wince in pain)

I will never forget my that bullfight but at least now I can say that I have experienced a bullfight. The experience also gives me an opportunity to talk about bull-fighting with friends. If a conversation has hat an awkward point then I can swoop in and say “So, bullfighting?”

Have a
coffee
with us